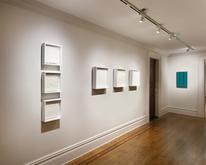 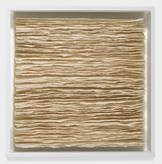 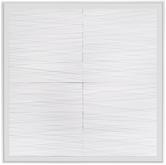 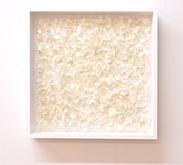 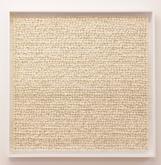 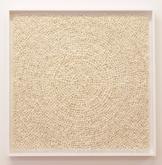 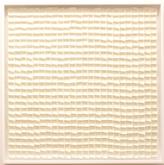 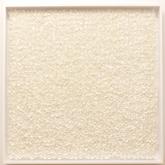 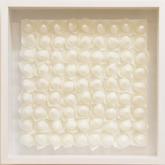 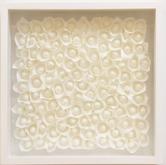 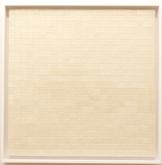 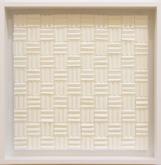 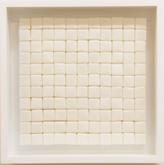 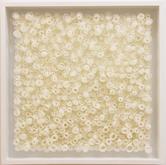 Barbara Mathes Gallery is pleased to announce an exhibit of recent works by Tadaaki Kuwayama and Rakuko Naito, the first show of Kuwayama and Naito’s work together in New York. It will feature Kuwayama’s titanium and aluminum objects alongside Naito’s paper and cotton constructions and will present their dynamic artistic exchange; a visual conversation resulting from their five-decade exploration of abstraction.

Naito and Kuwayama moved together from Japan to New York in 1958 and soon became part of the city’s avant-garde art scene of the 1960s. Both artists had studied nihonga—traditional Japanese painting—but distanced themselves from this training upon arrival in the United States, instead using spray paint, acrylics, and non-traditional materials in the production of minimal geometric works. Although they share thematic similarities, Naito and Kuwayama’s artistic approaches differ: where Kuwayama welcomes the mechanical and industrial, using materials such as anodized aluminum and titanium, Naito favors a manual physicality and natural materials such as paper, cotton, and wood. Naito rejects repetition, emphatically refusing to produce duplicates in her work, while Kuwayama makes identical units in series that can be variably installed. The surface of Naito’s work is visually complex and sculptural, whereas Kuwayama’s is smooth and flat. And while Kuwayama experiments with vibrantly colored anodized metals, Naito’s materials are white paper and pale wood.

Yet, despite such contrasts, the aesthetic dialogue between Naito and Kuwayama can be traced in the present exhibition: as the viewer moves through the gallery, Kuwayama’s anodized titanium pieces change color according to angle and distance, and Naito’s folded, shaped monochromes are modulated by light and shadow to create a moving play of texture. Both artists limit expressive gesture and use color inherent to their materials, and both engage in unique explorations of seriality and the monochrome. Through such essential concerns and subtle affinities Kuwayama and Naito’s work engages in a compelling and thoughtful visual conversation which, in the present exhibition, deepens our understanding of each artist’s work.

Tadaaki Kuwayama was born in Nagoya, Japan in 1932 and Rakuko Naito was born in Tokyo, Japan in 1935. Together the couple moved to New York and became associated with American Minimalism and Color Field painting. Kuwayama’s work was shown in several historic exhibitions including Systemic Painting at the Guggenheim Museum (1966), New York, and New Shapes of Color at the Stedelijk Museum, Amsterdam (1966) and is held in numerous public collections including the Guggenheim Museum, New York; The Museum for Contemporary Art, Tokyo; and The Museum of Modern Art, New York.  Rakuko Naito’s work was included in Motion and Movement at the Contemporary Art Center, Cincinnati (1964) and Black and White at the Wadsworth Athaneum, Hartford (1966) and is held in collections including the Kemper Art Collection, Chicago, and the Museo de Arte Contemporaneo, Buenos Aires, Argentina. Kuwayama and Naito live and work in New York City.