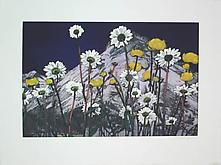 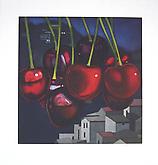 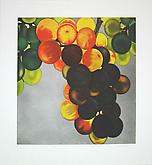 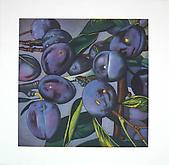 Karin Kneffel transforms mundane, everyday objects into seductive images that are enhanced by a sumptuous handling of light, shadow and surface. Best known for her portraits of animals, decadent interiors, and opulent still life paintings of fruit, Kneffel has reinvigorated these traditional genres, portraying them in a surrealist manner. Through the employment of unusual perspectives, dramatic foreshortening, and an exaggerated sense of scale, Kneffel invites the viewer to reconsider commonly overlooked objects.
The works featured in the show are etchings and aquatints printed on Zerkall-Bütten hand-made paper. Each print features similar or identical imagery to significant large-scale paintings from Kneffel's oeuvre. Carpet (2006) presents a richly patterned floral carpet highlighted by rays of warm sunlight. Enlarged and unexpectedly cropped, the image creates a surreal and dreamlike atmosphere, producing an ambiguous narrative. Grapes (2005) portrays a detail of perfectly unblemished grapes enlarged to immense proportions hanging from a vine. In Flowers (2006) an unusual perspective exposes the underside of white daisies and yellow roses, depicting them as soaring over a mountain landscape.

Kneffel studied under Gerhard Richter at the Düsseldorf Art Academy in the eighties. She has been the recipient of various honors and awards, including the Karl-Schmidt-Rottluff Grant (1993), Lingener Art Prize (1994), and a Grant for the Villa Massimo, Rome (1996). In January of 2006, the Ulmer Museum in Germany hosted a retrospective of her work. Since 2000, Kneffel has taught at Hochschule der Kuenste in Bremen, Germany.