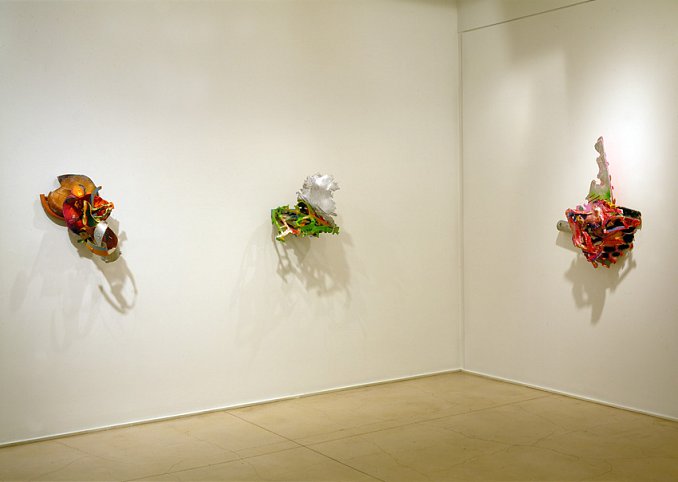 Barbara Mathes Gallery will present an exhibition of recent sculpture by Frank Stella from October 28 to December 22, 2000.

The polychrome aluminum and mixed media reliefs in the exhibition, executed between 1999-2000, are mainly from two series – Love Letters and Correspondence. The titles of these works refer to the writings of Heinrich von Kleist, a preeminent 19th century German playwright and author of short stories such as, The Marquise of O. Kleist fell in love with a young woman, Wilhelmine von Zenge, and he wrote her a series of eloquent love letters (1800-2), which have been collected and published. He also corresponded with other writers, playwrights and directors, including Johann von Goethe and August Wilhelm Iffland, the director of the Prussian national theater. The relationship with Wilhelmine was never consummated and Kleist, whose public writings received little recognition in his lifetime, committed suicide in 1811.

The wall constructions in the exhibition, which range in scale from the intimate to the more monumental, consist of a variety of colliding and interwoven forms including found metal objects, metal mesh and latticework, coils, cast smoke rings and wire cages. The reliefs, like the stories of Heinrich von Kleist, are unpredictable – full of surprising twists and turns. Stella considers Kleist's writings a source of inspiration for his abstract sculpture. According to the artist, Kleist's dramatic and theatrical writing style is "as close as we get to writing that seems ready for cinema – direct and forceful." He intends for his work to have the same visual impact as cinematic performance. Stella's interest in the theatrical is reflected in his current project -- an outdoor performance space entitled Bandshell currently under construction in the new American Airlines Arena in Miami.