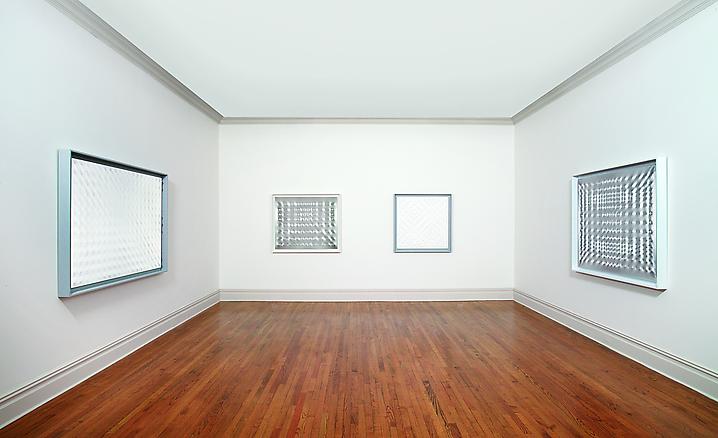 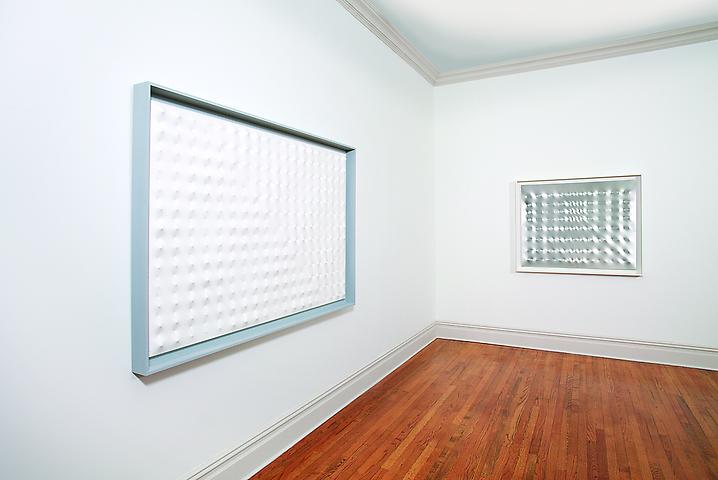 Barbara Mathes Gallery is pleased to present an exhibition of recent work by Enrico Castellani. The show will be the artist's fourth solo exhibition in the United States in his more than five-decade career.

Since 1959, Castellani has been creating relief paintings of uncompromising rigor and exquisite beauty. These works use painting's native materials—nails, wooden stretcher bars, canvas, and acrylic paint—to achieve surface effects that appear entirely alien to the medium. Strategically placed wooden slats on the verso serve as the foundation for the artist's rhythmic application of nails that alternately penetrate the canvas and pull it taut.

This process results in a unique topography of peaks and valleys that gives rise to a scintillating play of light and shadow that spills across the surface. Variations of nail height and spacing create dynamic optical effects, giving each work the appearance of a foreign and eerie landscape. While Castellani partakes in his own unique brand of illusionism, his work retains a literal character, as seen in his practice of titling each piece Superficie (Surface), referring solely to the obdurate canvas, from which he generates limitless perceptual intrigue.

This exhibition will feature Castellani's reliefs in white, which has been his preferred color for over four decades, as well as two of his rarer works in aluminum paint. With these works, both titled Superficie alluminio (Aluminum surface), the eye luxuriates in the opulent materiality, as the reflective, metallic surface augments the artist's optical play.

Enrico Castellani was born in 1930 in Castelmassa, Italy. He underwent training at the Académie Royale des Beaux-Arts in Brussels, where he initially studied painting and sculpture before receiving his degree in architecture. His friendships with Piero Manzoni and Lucio Fontana brought him into contact with important emerging currents in the European avant-garde, resulting in his contributions to the practices of the German group, Zero, and their Dutch counterpart, Nul. With Manzoni, he opened Galleria Azimut in Milan in 1959, which became an important hub of avant-garde activity during its two-year run. Castellani also participated in the Museum of Modern Art's seminal exhibition of Op art, "The Responsive Eye" of 1965. In that same year, he had an entire room dedicated to his work at the Venice Biennale, for which he won the Premio Gollin award for painters under the age of 40. The artist lives and works in the small Italian town of Celleno.