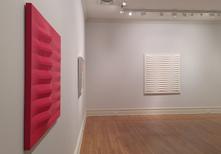 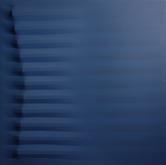 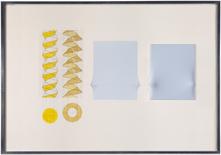 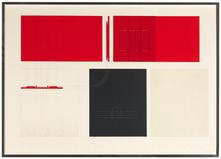 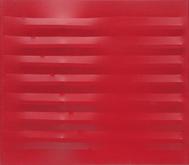 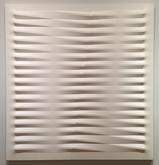 Barbara Mathes Gallery is pleased to present “Agosto Bonalumi: Paintings and Drawings.”  For five decades, Agostino Bonalumi was a leading figure in the Italian avant-garde.  Along with Lucio Fontana, Enrico Castellani and Dadamaino, Bonalumi was essential to the redefinition of painting as a spatial and material presence, and he made comparable interventions in sculpture and drawing. Bonalumi’s breakthrough came in 1959 with the advent of the “extroflection.”  Specially outfitting his stretcher bars with dynamically shaped relief elements that press against the back of the taut canvas, Bonalumi created paintings that appeared animated by a mysterious presence lurking beneath the surface.  The extroflection has proven to be a highly adaptable innovation that has resulted in a remarkably diverse body of work.  Demonstrating a sculptor’s capacity for inventive three-dimensional forms, Bonalumi has enlivened his canvases with bulging pneumatic volumes, undulating linear elements, geometric patterning, and mysterious involutions.  Color and light have been vital components of these investigations, and Bonalumi alternately favors saturated jewel tones or white monochromes that direct the viewer’s attention to the modulated surface contours.

Bonalumi’s Progetti (projects) occupy a unique place in his practice.  Conceived as a form of “meta-pictorial” visual research, the Progetti that Bonalumi began making in the early 1970s combine diagrammatic or preparatory drawings and small scale three-dimensional models of his extroflections.  Unlike an architectural plan or diagram, however, the Progetti function as stand-alone works that combine different aspects of Bonalumi’s forms.  Progetti often pair model extroflections with section and plan drawings in pencil against monochromatic fields.  Despite the relationship between the model, the diagram and the color and texture of the paper support, the Progetti function as creative meditations on the facets of Bonalumi’s practice rather than didactic expositions.  Bonalumi said of the Progetti, “I generally start with something I have created, making the ‘project’ become an autonomous work later on.  There is always an aspect of ambiguity in all my works.  For me it is like constantly checking the meaning of the research, and you never know where it will take you.”  Exhibiting Bonalumi’s extroflections and Progetti side-by-side offers viewers a unique insight into Bonalumi’s creative process and dynamic visual effects.

Bonalumi was born in Vimercate, Italy in 1935.  In the late fifties, he became active in the vibrant art scene of Milan, where he met Piero Manzoni and Enrico Castellani.  Together, these three artists founded the short-lived but influential gallery Azimut in Milan, as well as its two-issue in-house journal Azimuth.  Operating out of the sub-basement of a furniture store, the gallery exhibited some of the most innovative art of its time and, along with its publication, was instrumental in propagating international currents of the avant-garde, such as the German Zero group, the French Nouveaux Réalistes, and the American Neo-Dada art of Jasper Johns and Robert Rauschenberg.  Bonalumi has shown in numerous major solo and group exhibitions, including the Venice and São Paolo biennials.  Recent retrospectives of the artist’s work have been held at the Institut Mathildenhöhe, Darmstadt in 2003 and the Moscow Museum of Modern Art in 2011.  He died in September 2013.

September 17th - September 25th, The gallery is open Monday through Friday, 10AM to 5PM.

September 29th - October 30, the gallery returns to regular hours and is open Tuesday through Friday, 10AM to 6PM and Saturday 10AM to 5pm.

For more information or images, please contact the gallery at  212-570-4190 or at art@barbaramathesgallery.com.