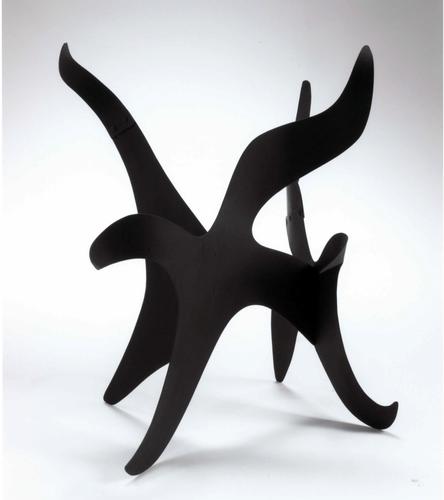 Oil and pencil on canvas Barbara Mathes Gallery is pleased to present Beyond the Brush for Art Basel OVR: Miami Beach. This Viewing Room will present a selection of works by artists who rethink the tools of painting and drawing. Whether applying color with their hands, pouring and soaking paint into their canvases, or sweeping it on with brooms, the artists presented here radically reimagined traditional techniques. Beyond the Brush includes works by Frank Bowling, Alexander Calder, John Chamberlain, Ed Clark, Manuel Espinosa, Joe Goode, Fausto Melotti, Joan Mitchell, Ad Reinhardt, Mira Schendel, and Richard Serra.

In Flying Footy (2018) by Frank Bowling, fluid leaflike green shapes are overlaid with silver, pink and a striking passage of raised gold. As in many of his works, Bowling begins by applying a thin stain or wash of paint to an unprimed cotton canvas placed horizontally. He then pours, drips, dusts, and brushes paint onto its surface. Bowling creates impasto and texture with acrylic gel, as seen in Flying Footy’s thick gold details.

John Chamberlain—arguably the preeminent Abstract Expressionist sculptor—was, in the words of Donald Judd, “the first to use automobile metal and to use color successfully in sculpture.” Panamapattie (2007) possesses many of the qualities that characterize the best of Chamberlain’s late work. The artist embellishes the already lively palette of the automotive industry with a boisterous application of paint, enriching the work’s chromatic possibilities and animating a complex circulation of painted and welded forms. Chamberlain takes full advantage of sculpture’s demand to be seen in the round, creating a work that presents a different formal configuration to each new vantage point taken by the viewer.

In the 1950s Ed Clark began using a push broom to apply paint to canvases that he laid on the floor, a technique he termed “the big sweep.” The resulting physicality and movement became a hallmark of Clark’s later paintings. Untitled (2002) exhibits Clark’s signature broad gestures and luminous color. Horizontal strokes of yellow, green, white, orange and black streak across the canvas. The brushstrokes are amplified by the neon brilliance of Clark’s palette and his thick, textured application of paint.

Ed Clark’s technical experimentation was not confined to his works on canvas: Untitled (1996) is an example of his works on paper using dry pigment, a technique inspired by Pueblo sand paintings of the American Southwest. Here he reinterprets the oval forms that had preoccupied him in the 1960s—both as composition and in his pioneering series of shaped canvases—presenting curved shapes as glowing clouds of atmospheric color.

Joan Mitchell worked in pastels throughout her career. In her hands, a medium often associated with delicate sketches became a tool for Abstract Expressionist bravura.  Pastel’s versatility—it can be used for drawing or smudged to create painterly effects—was ideally suited to Mitchell’s innovations. Pastel (1991) dates from a year-long period of concentrated work in pastel towards the end of Mitchell’s life. Here, fierce red, blue, yellow and green lines are overworked and blend into a crush of vivid pigment. Pastel exemplifies the rhythmic control of Mitchell's approach to composition as well as her rich and unexpected layering of vivid color.